(Skip ahead if you know how the internet works)

When I was a teenager I used to moderate a phpBB web forum that my friend had set up. It was a small instance that just had a few of us from high school. My friend had downloaded the phpBB software and launched it on a webserver he rented. The webserver was just a computer in a data centre somewhere in the world. There was nothing architecturally special about it. He could run the same web services from his local computer, although, in practice it was difficult to keep his local computer "always on" and available. This is how people used to interact with the internet. The internet has and always will be a loose federation of other people's computers. 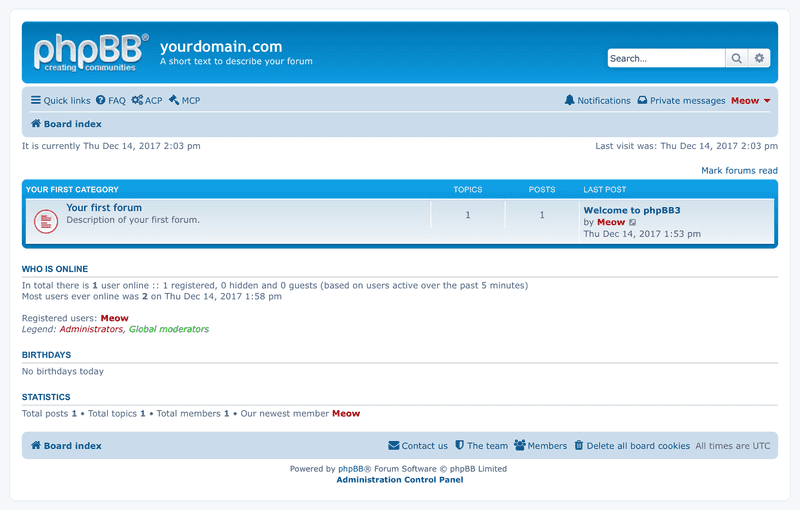 A fresh install of a phpBB forum. Hopefully familiar to some!

Whenever you visit a website there is always someone behind the scenes running the site. You can search that directory with sites, like https://whois.domaintools.com/, to find out who. As more and more people joined the internet, we collectively realized that the time and money it takes to keep websites going puts running our own websites in the too hard basket. Thus, people started to gravitate to "free" social media platforms. It was always clear there was a comprise between your own control of the content you put on these websites versus the effort in maintaining your own. For the most part this exchange was acceptable. In those days, the biggest furor was over Facebook changing the page layout.

As social media became less about posting cat pictures on Caturday and more about following breaking news stories, the control we gave away for the convenience of having someone else do the dirty work has become more pointed. For me, I use social media for keeping in touch with family, friends (Facebook) and colleagues (Twitter). I find social media platforms these days are no longer fit for purpose. There is too many advertisements and promoted content along with the poor filtering and searching features. The alternative is one that has always been there - move back to independently-managed (self-hosted) websites.

Mastodon is a free and open web application that runs on a webserver, much like (self-hosted) Wordpress for blogs or phpBB for forums. Mastodon is designed for microblogging - similar to Twitter. There is an open instance that you can try out (for free) at https://mastodon.social/. What makes Mastodon different to, say, phpBB, is that the different instances can (and do) communicate with each other. Mastodon uses a standardized, open protocol to implement federation. It is called ActivityPub. Any software that likewise implements federation via ActivityPub can seamlessly communicate with Mastodon, just like Mastodon websites communicate with one another.

Each instance is largely self-contained, although users can follow feeds and interact with users on other instances. A user's feeds are populated with people they explicitly follow (Home), people in the same instance (Local) and people in other instances (Federated). The character limit for each post is 500 by default. For more information see https://docs.joinmastodon.org/

How is Mastodon implemented?

Mastodon is written in Javascript and Ruby. It runs as a web application with a PostgreSQL database backend and a Redis cache up front.

If you are worried about the effort of posting on yet another social media platform. You can synchronize your posts between Twitter and a Mastodon instance. It can be configured to be be one way (twitter -> mastodon; mastodon -> twitter), or both ways. I am using https://crossposter.masto.donte.com.br/ at the moment. There are others.

There are official mobile apps that you can use https://joinmastodon.org/apps. There are also third party ones as well. I am using Tusky a mastodon client for android, see https://tusky.app/.

Does it matter which instance / server that I join

Yes and no. Your local feed will be populated by people in the same server as you. When you start, you will initially see a lot of content from these users. There is nothing stopping you from following anyone in any other instance. Hence you have complete freedom in which content you would like to see. Over time you will tailor your feed as you like it.

The most important thing to check is the server rules. This is the critical point of difference between instances. Rules are usually around the content or the community, but some can have practical implications. For instance, some instances do not tollerate automatic cross-posting from Twitter. So do read the server rules before joining.

Hashtags play a much more important role on mastodon than they do on twitter. There’s no analog of the twitter algorithm scanning post content to determine what to show people. If you want your post to be discovered by people who aren’t following you (which, admittedly, isn’t always the case), make sure to choose the appropriate hashtags.

You can track hashtags too.

Some of us in the Microbial genomics community have setup our own instance at https://mstdn.science/. You are welcome to join. It is a place for people our field, scientists in general, and science enthusiasts to discuss research and topics surrounding our work. It is hosted on a small Digitalocean server, and I am still tweaking certain parts of it. The whole thing is in its infancy, and might just crash and burn.

If you want to chip in for running costs, you can Donate using Liberapay. You can make a one-off donation with PayPal.

All moderation in a mastodon instance is community driven. So as the community grows, we may need help with moderating content.

There are other instances that you may find closer to your interests:

The banner image is an AI generated picture (Midjourney) with prompt; 'mastodon'. You can share and adapt this image following a CC BY-SA 4.0 licence